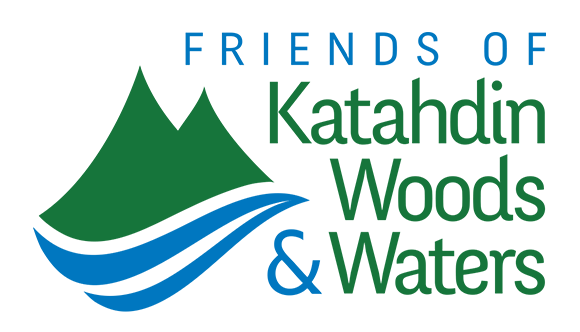 I love winter. More precisely, I love snow – winter without snow? Blech, who needs it! Tired of the lack of snow here on the Maine coast, one recent evening I spontaneously (highly uncharacteristic; I am not a spontaneous person) decided to head a couple hours north to ski into a hut and spend a night in the middle of the Katahdin Woods and Waters National Monument. By 9 AM next morning, I had determined the huts are in fact available for use in winter, secured my hut reservation, an overnight parking pass for KWW, and dog-care at the wonderful Katahdin Kritters for my furry friend Tess. So what that it was forecast to be the coldest night and weekend of the winter yet, with below zero temperatures, I’m a New England girl I can handle it! I dug out my back-backing gear from storage, put TWO sleeping bags in my pack not being sure exactly what “hut” in this instance would consist of, and off I went!

It’s a bit of a haul to get to the north end of the Monument from my home on Mount Desert Island, and I had a meeting on the way, so it was 2:20 in the afternoon before I reached the gate where I’d leave my car and set out on my skis – sadly at this time of year only 2 hours before sunset. But no problem – I had anticipated the late start, and it was plenty of time to ski the 6 plus miles (via the Old River Road trail along the Penobscot River) to Haskell Hut. Even if I lingered too long taking photos and didn’t make it before sunset, I had lots of warm gear and a good headlamp – not to mention a beautifully clear sky that would no doubt offer multitudes of starlight under which to ski – so while I preferred to arrive to a new place in the daylight to check it all out, I wasn’t concerned about darkness coming before I reached the hut.

The first stretch of trail, on the Old River Road, followed the banks of the Penobscot River. It was relatively flat and easy going, and with the trees heaped with fresh snow, and the dazzling sunlight illuminating the snowy trail as well as the water smoothly flowing by, I was in winter-wonderland-heaven. After about 2.25 miles, I came to a marsh on my right and crossed a small bridge where the marsh emptied into the river. The marsh afforded a beautiful view across to the ridge of a Bald Mountain. Alongside the open marsh, there was nothing to hinder the wind, but I braved chilled fingers to take off my giant mittens and snap some photos all the same! Just past the marsh, I came to the Oxbow Road, which took me right back up to the main trail (Messer Pond – Orin Falls Road).

From this point to Haskell Gate, I went up and down some gentle grades surrounded by the bare-leafed branches of deciduous trees. By now the sun was quite low in the sky, well hidden by the mountains, with dusk settling upon the landscape. The stark silhouettes of the tall trees and sharp angles of the branches were all the more emphasized by the purple sky glowing behind them. The patterns of the trees in the darkening dusk, the ever-changing light, the chill air stinging my exposed face (I had long before ditched the face mask I started with), the shusch-shusch-shusch rhythm of my skis sliding across the snow the only sound insinuating itself into the silent evening – I was totally absorbed by being in that place, in that time. Anything seemed imaginable. Lingering in the past holds one down; worrying about the future hems one in; but just BE in the present moment, and the world is suddenly full of promise and possibilities. Pure magic.

Past Haskell Gate, the trail took a bend downhill into a spruce forest, the spruce boughs heaped thickly with the recent snow delighted me. This was the final stretch before reaching the hut, to which I did arrive before it was entirely dark, though sunset was well past. While I liked the idea of skiing by starlight on such a clear evening, I was glad to reach the hut, new to me, before dark, so that I could take a look around and get my bearings. And make sure I knew the location of the outhouse (took me a bit to find it, even in the lingering light!)

When I decided to do this trip, I wasn’t sure what I would find as to my accommodations and exactly what sort of a hut this would be! But I was pleasantly surprised by how substantial Haskell Hut was – not necessarily in size, spacious enough but cozy too, sleeping eight – but well-enclosed, well-provisioned with cooking pots and pans and dishes, and games, books, and puzzles – and a rocking chair!

And, most importantly, quite the workhorse of a wood stove. As soon as I arrived – after finding the outhouse and snapping a few photos as well – my priority was getting a fire going before I cooled down too much from my ski. I huddled in front of the wood stove and worked on thawing out my toes while the temperature inside the hut began its slow climb out of the single digits. It took about an hour before it was comfortable enough – standing in front of the fire – to change out of my sweaty ski clothes, and start melting snow and heating water for my dinner. By the time I ate my dinner, I had to move the rocking chair well back from the fire and take off my hat; by the time I went to sleep, it was almost TOO hot in the hut! Frankly, I was much warmer in the hut than I would have been at home in my drafty house, with the not-so-great wood stove with which I heat it.

Next morning I woke in the early hours of dawn; I could have laid there forever savoring the reflective light of the not-yet-risen sun lighting the sky over Haskell Deadwater and shining its way around the trees in through the windows. But I wanted to see the sunrise properly! So, still ensconced in my sleeping bag, I threw on some boots, hat, and mittens, grabbed my camera, and headed out into the chilly morning. It was magnificent! Minus eight degrees according to the thermometer, but I was relishing the wintry air. It was so still and serene – not a breath of wind, nor a murmur of sound to be heard. I spent a good half hour watching the sun emerge and slowly light the treetops, the hut, and finally the snow beneath me.

A re-warming by the stove, hot coffee, and some dried fruit and nuts were called for before heading back out for a morning ski. I made my way down the main trail to explore further along to the south. I found Haskell Rock Pitch, three-quarters of a mile down, and enjoyed the sight I’m much more familiar with in the summer, of the cascading falls of a river. I continued another mile and a half or so, completely reveling in the brilliant sunshine and utter snowiness of my surroundings. It seemed like mere seconds before my designated turn-around time forced me to head back to the hut.

When I saw the hut come into view perched atop the bank of the Haskell Deadwater, it felt like a homecoming of sorts even after just a single night there. I revived the coals of the fire to make some hot chocolate, giving myself some time to linger just a bit more. But reality was rearing its ugly head, and I needed to be off. I refilled the wood I had used from the woodshed, swept up, and said my goodbyes.

By this time, temperatures had warmed to the balmy low teens, so I ditched one of my layers from the day before and the morning, and set back out to the north. I couldn’t resist going the extra mile and a half to go back by way of the river again. When I reached that stretch, a small breeze afforded by the river’s proximity had both brought down quite a bit of debris to ski over, and completely obliterated the groomed trail with drifts, though the drifts were hard-packed enough to easily ski over. That wind, however, was just enough to send those cold temperatures right through my now-reduced layers of gear, resulting in my not being entirely sad when I reached my car! Plus, after not skiing all winter due to a lack of snow at home, 16 miles in two days, with a fully-loaded pack, had taken its toll on my quadriceps. Always hard to get back into the car and head back to the “real world” even after just a short time in the wilderness, but boy was I tired out!

I had departed the previous day at 2:20 and strangely returned to my car at exactly 2:20 to the minute the following afternoon. Such a short time really, but so huge in its significance. And to think, I could have – and almost – stayed home, sitting around avoiding the cold, and doing chores around the house. Instead, I made a tiny bit of effort, and had the most wondrous and unforgettable experience, enjoying the wintery wilderness of this amazing place that I’m lucky enough to call home.